Christian Rock, Worship, and the Church

Actual History of the Rise of Contemporary Christian Music 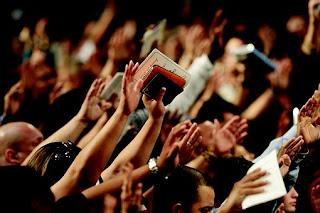 The hippie Summer of Peace took place in 1967. By 1968 the drug branch of hippie culture had separated from the peace and love branch and that branch itself split into secular and Jesus people wings.

Church kids had been singing "camp songs" since the 1940s, either acapella or accompanied by acoustic guitar. With the rise of new folk music in the early 1960s, leaders of church youth and camp programs capitalized on this cultural phenomenon by structuring youth programs that included 20-30 minutes of singing of Christian choruses. The most effective youth ministers started services with fast songs and gradually slowed down the rhythm as the song lyrics moved, in relationship to Christ, from praise to devotion and holy living. But what went on in the youth services was not typical of the "adult" worship services. At successful churches, the adult service began with an organ prelude, continued with a 40-60 voice choir singing a hymnal "praise" composition, continued with 20 minutes of congregational singing of doctrinally-rich Christian hymns from the 1700-1800s, and ended with a stirring Bible message preached by a good pulpiteer. The doxology was often sung and usually some song of recession was played after the pastor pronounced the benediction and dismissed the adult congregation.

The Cultural Position of the Evangelical Church in 1970

At a typical evangelical mid-western church in the late 1960s, if a kid with long-hair responded to the message invitation, the first thing the deacons did was cut off his offending locks. What was it about long hair on a man which so offended? The church and conservative American politics were blended together in a cultural message that equated Christian holiness in dress and culture with early 1950's American clothing and grooming style. Furthermore, I Corinthians 11:14 stated, "Doth not even nature itself teach you that, if a man have long hair, it is a dishonor to him.?" Seizing on apparent New Testament support for conservative American dress, church leaders initially denounced hippie dress, style, and music, even that of the sincere, but un-churched, Jesus people.

But this backfired. By 1969 evangelical church pastors realized that the youth ministries of their churches had been impacted by the Jesus movement outside the church. Church teenagers saw what appeared to be more love and acceptance among long-haired iconoclasts outside the church than among staid congregants within the church. Church emphasis on maintaining the superficial values of dress, style, and traditional Christian hymnal music seemed at odds with the emphasis of Jesus people on sincerity and devotion of the heart as the primary Christian concern.

The most thoughtful pastors and Christian leaders knew something had to be done. The static Christian church was in crisis. The less thoughtful pounded the pulpit and shouted, "'As for me and my house...' we will remain where Jesus stood," confusing status quo American culture with Biblical principles.

What did the evangelical church do to stop the flight of Christian youth and evangelize the un-churched in the early 1970's? They took the historic Christian youth program and moved it from the church camp and an audience of teenagers to the 11:00 am Sunday adult worship service. The choir was disbanded, vocal soloists were condemned as self-glorifying, the organ and grand piano were pushed to the side and teenage musical guitar players replaced the classically trained pianist. The adult congregation began singing youth choruses all the time! The 11:00 am Sunday adult worship service began to resemble a service at a teenage Christian youth camp in the early 1960s. That's what happened!

The Place of Contemporary Worship Music in the Church

If your church has a contemporary worship service using a rock band singing rock anthems and choruses as worship staples, where do we go from here? Consider the following:
If every doctrinal argument raised in the past to condemn Christian rock were proved true, it doesn't matter. The church either embraced youth culture and made it the central program of church worship or rejected it. That is a fact of history!
Don't congratulate yourself if your church never brought the rock band onto the Sunday morning platform and you are still singing out of hymnals, as your denomination did in 1960. If the contemporary evangelical church reaches into the back of its closet and retrieves a piece of antique culture (a hymn) for modern use, traditionalists should not rejoice that hymnal music has returned to vogue..

The evangel of the Christian faith remains the same in any age. However, in our post-modern, post-christian culture, churches need a new path forward in the twin goals of making disciples and growing Christians in the New Testament life. The key questions to answer are as follows:
Both evangelical and holy living messages must be a part of the total Christian word spoken to the modern world. Every local church has a personality. Every church has a pastor and Christian leadership who should connect with the twin goals listed above and find means to accomplish them in their own Jerusalem, Samaria, and to uttermost parts of the earth. Those who share similar philosophies of ministry can associate in denominations. The key ingredient in musical choice is motive, not style and taste. Any style of music can glorify God, what matters is the hearts of the players and the listening audience.

Why not use various music styles evangelistically? The old joke applies here: What do you call ten banjos at the bottom of the ocean? Answer: A good start! Every church music director has seen that style and taste in music varies greatly among church people. So, have a "Country and Western" Sunday, a "Classical" Sunday or a "Choir" Sunday and use style and musical taste as a way to get folk under the sound of Gospel preaching. Why exclude people by banishing their musical taste and style from your church's music program? Why drive people away or silence their praise by insisting that the same rock choruses be sung every other week played by a 3-guitar electric band? Why not have some Sundays when there is no music at all! Or some Sundays when all music is vocal and musical instruments of any kind are not played?

This is the essence of a post-christian presentation of the Gospel message. Christianity should no longer be identified by anything as superficial as musical style. We play every kind of music on every instrument, only asking that it glorify God. We can dress in any color using any fabric, we only ask it be modest. We do not have to attend church dressed in our "Sunday Best", we can come as we are. If your church encougrages casual dress, why not have a Sunday where everyone is encouraged to dress in suits and ties as a special way, that day, to honor God?

Article Source: http://EzineArticles.com/5952842
at 10:49:00 PM
Email ThisBlogThis!Share to TwitterShare to FacebookShare to Pinterest